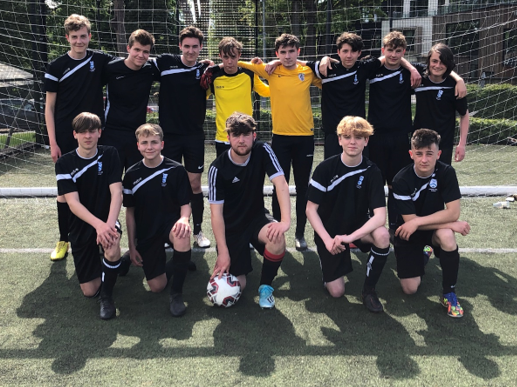 On Wednesday 26th May our Yr 11 football team travelled over the hills to the sprawling urban metropolis that is North Tidworth, for a final chance to battle on the football field with our adversaries from Wellington Academy. Buoyed by the last fixture (a narrow defeat 4-3, after being hammered 9-1 in Year 8) we travelled as much in expectation as in hope this time!

Led again by Charlie F, we arrived and went through a full warm-up, surely this was our day! The sun was shining on a confident team ready to go! The game started and Wellington was on the front foot. It took us a little time to get into the match, but we slowly began to play our football and create the odd chance. In the first 20 mins, the front 3 of Jude C, Alan C and Nathan E worked tirelessly harrying the Wellington defenders at every opportunity.

It was at this point that the “commentator’s curse” struck. Manager Spaul turned to coach Johnson and said, “Well 20 mins gone, the score’s 0-0 and we’re starting to compete”. At precisely this point, the Wellington central attacking midfielder unleashed a shot from fully 25 yards that flew into the top corner and it is doubtful whether many goalkeepers would have managed to keep it out. This caused our heads to drop and resulted in Wellington scoring 2 more goals in the next 5 minutes. It is to the credit of the defence, Lewis G, Connor R, Callum T, Finn M and Oli M that they regained their shape and composure in the last 10 minutes of the half, so we went into halftime only 3-0 down.

After a rousing halftime speech from the manager and tactical instructions from the coach, we kicked off for the 2nd half. Charlie F, Ben E and Jack C in midfield ran themselves into the ground and worked hard to transition the play effectively up the pitch. For 15 minutes they did exactly that, then one small defensive lapse opened us up again and Wellington again had a 5-minute period where everything they tried came off, and they scored 3 more goals. It was at this point that one “witty clever clogs” from Wellington shouted out “next goal wins” which he thought was ever so funny. The last laugh was definitely on him as from the ensuing kick-off, Charlie F launched a powerful curling shot from all of 55 yards, which had the beating of the hapless Wellington keeper, who could only pick it out from the back of his net! Again, to the credit of the whole team, we withstood the forthcoming onslaught and Wellington did not score again, so if we were playing “playground rules” we won the match!

In hindsight, the dry pitch did not help us - slowing down the speed of passes and making our slick passing game more difficult to play. The wet weather in the first match definitely helped speed up our passing game. It was the last fixture for many of the boys and for their manager, who would like to say what a pleasure it has been to be involved with this group. In his long and somewhat illustrious career, having taken teams to National Finals in Football, Rugby, Cricket and Athletics, this group of lads have been as delightful a group as any. I wish them well in whatever they do and wherever life takes them!