The weather was not on our side, however, just in time for Sports day to start the sun started to shine. We had a wide range of activities taking place, to include and motivated as many pupils as we can to be involved in a fun day!

Taking place up the field we had rounders and athletics. Within rounders, pupils played in the tutor group against the other houses in their year, we had participants from all year groups. Overall, In 1st place was Cousteau, 2nd place was Earhart and 3rd place was Hillary. In regards to athletics, we had pupils from all year groups participating in the 800m, 100m, shot put, discus and standing long jump. Overall, the winners were Cousteau, 2nd place was Hillary and 3rd place was Earhart. Well done to all of those who participated!

Down on the courts we had football taking place, we had 7s, 8s and 9s playing on the courts and the year 10s on the field. The pupils played a small 5 a side game to try and win points for their house, well done all for playing so well. Overall the winners for football were Cousteau in 1st place, Hillary in 2nd place and Earhart in 3rd.

In the library, we had several chess games taking place. We had pupils from all year groups playing against different houses to try and gain points for their team. Once the results were in we had Hillary win in 1st place, Cousteau in 2nd place and Earhart in 3rd place.

In the sports hall, we had single badminton games happening. Pupils played against their year group to try and get as many points for their house by winning their matches. In the end, the results were 1st place – Cousteau, 2nd place – Hillary and 3rd place – Earhart. Well done to all those who played well in badminton.

After lunch, with the weather still holding out we had the relay races. In each year group, we had 3 races - a boys team, girls team and mixed team. These pupils raced against each other in the houses to try and boost up their points for the overall result at the end of the day. The winners for the relay races were as followed:

Well done to every who nominated themselves to run, a great effort!!

The day was a great success, even though we got caught in the rain as we were about to announce the winners. However, all pupils were sent back to tutor to hear the winners announced over teams. So, the final results were counted and in 3rd place was Earhart, in 2nd place was Hillary and our winners of sports day 2021 was Cousteau.

Thank you to all the pupils who participated and all the staff for helping out, couldn’t have done it without you all. 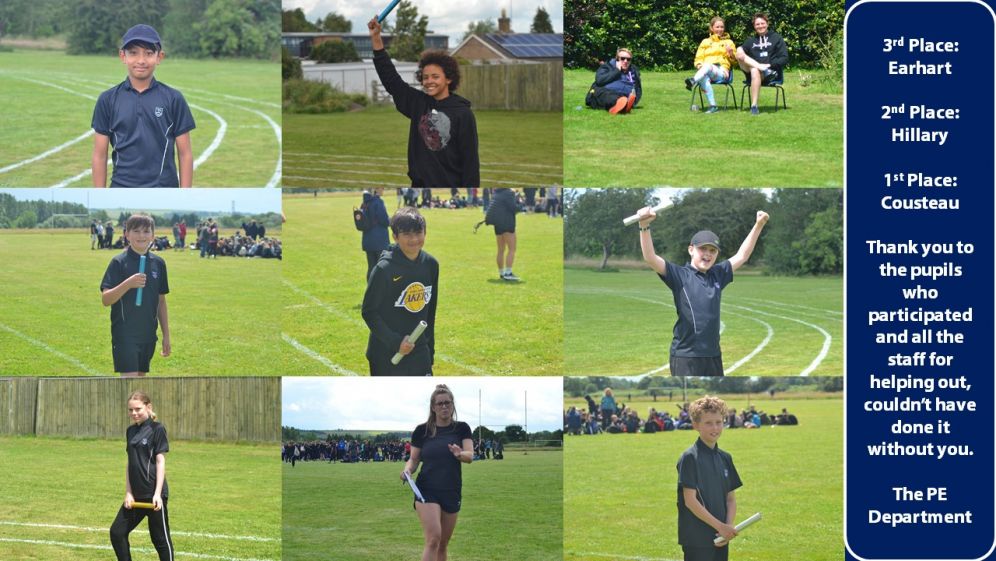